There has almost certainly been a place of worship in this area the same length of time as at Largo. The two churches were rededicated within two days by Bishop David de Bernham in 1243.

With the old church having become too small and dilapidated a new church was built in 1817. It is easily recognisable with its small square tower and spire. It is now a private residence. The "new" church continued in use until the retirement of the Minister, Revd. George Frederick Cox, in 1958 when Newburn and Largo united.

​The 1914-1918 War Memorial and the fine communion silver have an honoured place in Largo Kirk. In addition in 1965 Newburn's pulpit and Baptismal font were also sited in Largo. The old churchyard contains memorials of considerable interest, included in which are some former Ministers. For a number of years a well attended open air evening service has been held in the grounds of the old church on the Sunday nearest to Mid Summer's Day. 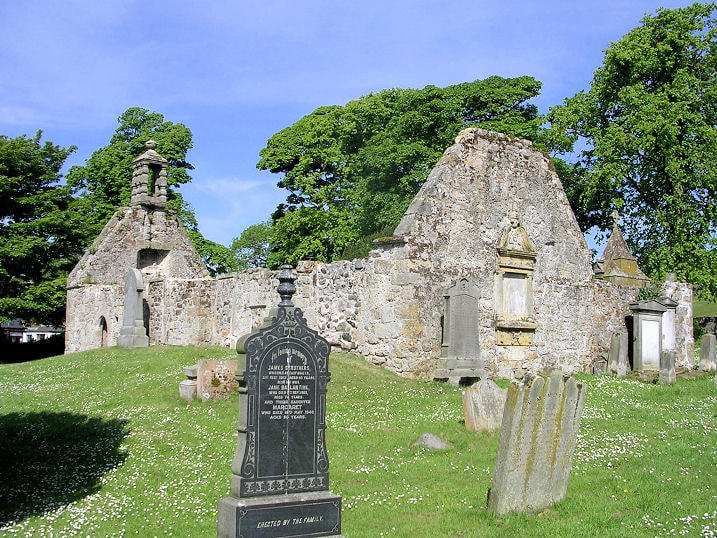 Old Church, Newburn
A Newburn Moment
​by Alan Elliott
The Church stood lonely in its grounds,
and all was still: the lovely sounds
of swallows fluting overhead.
The cattle lowing; sheep – they fed;
the rain clouds came from hour to hour,
with little wait for the next shower ……

But soon there was some movement here,
and people started to appear;
then more and more – who came to share
the Service in the open air.

The Minister soon took his place.
He welcomed, with a smiling face;
no longer in a stormy blast;
evoking mem’ries of the past.
He turned, the sky was overcast
but still – one could not ask for more
as, gazing on the distant shore,
his inspiration from the view
was shared by all the others, too.

The simple service followed now,
with opening prayers the heads all bow.
Then readers from the congregations
absorbed the mood, and took their stations
to read, with claity and poise,
and there was no distracting noise
from birds or flocks, and nought occurred
to spoil the reading of the Word.
The hymns were sung with quiet grace
to match the magic of the place.

In bygone years where many trod
in just this place to worship God,
how easy there to understand
the beauty of an unspoilt land;
where, far from politics and strife,
a man could lead a happy life.

This was indeed a moment rare
to all the people gathered there.