1644 : James Makgill. Presented by Sir Alex. Gibson, Durie; admitted 28 March 1644. Confined to the parish on Episcopacy being established in 1662; deprived 6 April 1665 for refusing sub-mission to the Church government.

1665 : John Auchinleck M.A., son of Andrew above, Minister of Newburn. Presented by James, Archbishop of St. Andrews and admitted 1 Nov. 1665. Ousted by the rabble between 29 May and 2 June 1689, being obstructed in his duty by a great mob, armed with staves and bludgeons.

1691 : William Moncrieff, youngest son of Alex. Moncrieff, Minister of Scoonie. (His father often mentioned along with James Makgill by Lamont in his Diary, was “inhibited by Charles II on 12 July 1661, from exercising any office within the parish to which he was confined”. A decree was issued against him on 1 July 1674, for holding conventicles. He eluded his persecutors, dying on 6 October 1688 and was buried in Greyfriars, Edinburgh).

1764 : Robert Ferrier, son of the preceeding. Ordained Assistant and Successor 23 August 1764. Adopting views of an Independent Church Government he demitted his Charge on 23 November 1768. Formed a new sect in conjunction with James Smith, Minister of Newburn, at Balchrystie.

1843 : Joseph Taylor Goodsir. Born Lower Largo. Son of Surgeon, John Goodsir. Resigned 27 Nov. 1850 on the grounds that “the standards of the Church were not consistent with the teaching of scripture”.

1650 : James Fleming M.A.  Minister of St. Bathans in the Lothians. Admitted during his stay in the country, Nov. 1650. Lamont’s Diary of July 1651 states “Mr Ja. Fleming after he had Preached att Newburne in Fyfe for the space of 8 or 9 month, went backe to Louthian, to his owne churche att the Bathens. The occasion of his remouveall was the English comeing to this shyre”.

​Interesting facts from a few of the Ministries

​Largo Kirk has not been immune from discord caused by national events. At the restoration of the monarchy in 1660 the government of the church became Episcopal being forced on Scotland by the King, Charles II. The minister at the time in Largo was Rev James Makgill who was removed from office in April 1665 for refusing to accept this form of government. He was replaced by Rev John Auchinleck in November 1665 but “was ousted by the rabble” who closed the church doors 29th May 1689 for a period of six to seven weeks on the return to Presbyterianism in June 1689. Subsequently Rev James Makgill returned to Largo in 1689 and was restored by Act of Parliament 25th April 1690.

​The Disruption of 1843 was a schism within the established Church of Scotland when 450 evangelical ministers broke away over the church’s relationship with the State and formed the Free Church of Scotland. One of the points of contention was the right of patronage whereby a wealthy patron could install a person of his choice as minister and those who held the view this infringed on the spiritual independence of the church.
The minister in Largo was Rev Robert Lundin Brown who broke away becoming minister of Largo Free Church from 1843 – 1877. He was replaced by Rev Joseph Taylor Goodsir who himself resigned 27 November 1850 on the grounds “the standards of the Church were not consistent with the teaching of scripture”. 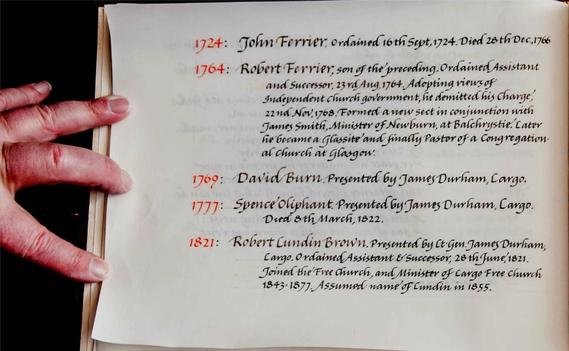 Ministerial Roll
From Fife Herald, 12th September 1894
Underneath the floor of one of the passages of the Church, and three feet from the surface, the workmen have come upon a stone bearing the following inscription – Here lies the Rev John Ferrier, late minister of the Gospel in this Parish of Largo,who was born the fourth of September 1698. Ordained minister of Largo the 16th of September 1724 and died the 28th of December 1766. Seven of his own children and three grand children lie buried in Largo Churchyard.

Over the centuries a few of the ministers made Largo Kirk their lives work by serving the community for 40 years or so. The one of most recent memory was Rev Duncan Macmichael who ministered here for 39 years. The following is an extract of Sesion minutes 7th December 1943 :

To the list of those ministers of the Gospel who have passed away in the service of the people and parish of Largo we now add another revered name. The Rev Duncan Macmichael, B.D. himself a son of the manse was born at Craignish in 1863. Educated at the Royal High School and at the University of Edinburgh, he was licensed by the Presbytery of Inveraray and became assistant in the Church of Kilfinan and Kilbride. Ordained to the ministry at Duncansburgh, Fort William in 1889, he demitted this charge ten years later when he volunteered to go out to India as Chaplain to the newly settled district of the Dooars; the fine work which he there accomplished laid the foundation of what became a model mission of the Church. In 1904 for reasons of health Mr Macmichael returned to Scotland and almost immediately he was elected minister of the parish of Largo, a charge which he faithfully served until his death, which took place in the manse on 29th November 1943. Throughout his long ministry in Largo Parish Mr Macmichael won and held the esteem and affection of nearly three generations of his parishioners. From the outset his own love of the fair land in which his lot had fallen was clearly manifest nor did it diminish with passing of time. A man of wide sympathy, of winsome, humorous and approachable personality, and at the same time of profound religious conviction, the Rev Duncan Macmichael went in and out among his people in the loyal discharge of his duties for nearly forty years. His wise and tactful influence in all matters concerning the church may be gauged from the fact that not once during his pastorate did it become necessary, despite some acute differences of opinion, to take a vote on any question discussed at a meeting of the Kirk Session. Intensely proud of his charge Mr Macmichael found great pleasure in preserving and adding to the beauty of the Church, andhis own generous action in securing the Church Rooms and putting it in orde has proved of incalculable value in stimulating the activities of the parish. Mr Macmichael’s beloved wife died in 1934 and her place in the manse was taken latterly by his devoted sister. To her and to his only son the Kirk Session, in the name of the congregation wish to express their deep sympathy and also to place on record now their own admiration, regard and affection for a friend with whom it was a privilege and an honour to be associated in the sacred work which under Providence he was called upon to do.  ( Thos R Stewart, Session Clerk ) 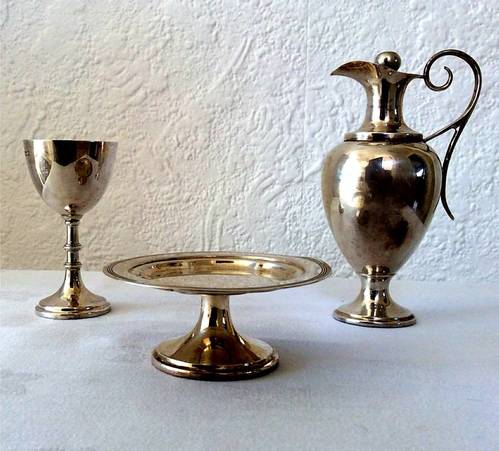 ​The Luneberg Story and Christian Aid

Rev Douglas Lister translated from Inverurie Auld Kirk to Largo and Newburn in 1967 and served as minister here until he retired in 1986. However, this story begins many years before. His book opens with the intriguing sentence, "my posting for insubordination in 1946 was the best posting I was ever to have. I was in Gibraltar as Garrison Chaplain … and I was asked to raise money for the Commando Benevolent Fund". Perhaps this early experience of fund raising inspired what came later, but shortly after this he was asked if he would go and be Garrison Chaplain to five thousand Service Personnel in Luneberg, attached to the Royal Scots Greys.

He goes on to describe the abject desolation that was post war Germany, He writes, their great cities and towns lay in ruins around them, as ours did, as a result of the war’s “obliterative bombing”. Poverty and hunger were everywhere along with the guilt of having been conned, as we were, by Adolf Hitler. One day Douglas was approached by a man wearing a Luftwaffe jacket and a camera strung around his neck. His name was Joseph Makovec and he was a professional photographer.

“I wonder if you can possibly help us?” he asked with some anguish in his voice. “ There are 80,000 refugees out there, freezing to death. A year ago they fled the Russian Zone across the nearby River Elbe”. I replied “I have over 5,000 souls here to try and care for.” Mac replied “I know”. “What can I do?”  I countered . I remember the slightly quizzical smile on his face as he replied “You could perhaps get them help too”. I hadn’t known anyone teach me my own job so well before. I realised we were the same kind of people and we bonded at that moment and were to stay that way.

Douglas goes on to describe the horror he saw and he was horrified. Against orders which prohibited so-called Non Fraternisation with the enemy he decided to fight High Command. The humanity of the Brigidiar of the 4th Armoured Brigade stationed in Luneberg, Rex de Winton saved the day – and the refugees.” Go ahead Douglas and may God bless these good people”. As a result Douglas sent a letter out all over Scotland, entitled GERMANY CALLING AN APPEAL FOR YOUR HELP. The letter describes Germany’s desolation, the heaps of rubble that were Hamburg, Hanover and Munster and goes on; Now Germany stands in a very dangerous position, physically, morally and spiritually ,,,,,,,,, and one thing is certain; IF SHE GETS IT SHE WILL BELIEVE IN US, RESPOND AND WORK WITH US IN EUROPE’S DIFFICULT FUTURE. Of this I am thoroughly convinced. His final paragraph of appeal reads, I send this letter to you in complete confidence that you will co-operate, and recruit others in this campaign, and thus make it a success far greater than we could ever expect. I am, Your very sincerely, Douglas Lister C.E.

The story goes on to record the Germany Calling Appeal worked, not just in quantity but in the sheer quality of food and clothing donated. Douglas says he was overwhelmed by Scotland’s generosity. He tells too of the warm generosity of John Althorp later Earl Spencer who was Diana, Princess of Wales’ father. His genuine feeling for the oppressed so obviously surfaced in his daughter.

In fact, other Chaplains across Europe also had been helping people in their difficulties, this developed into what was named “Inter Church and Refugee Service”. “Christian Aid” grew out of this to become one of the most important and useful operations of the Christian Church.

​Led by the vision of Rev J A H Murdoch the Churches of Largo and Newburn linked with Largo St David’s commemorated the 400th anniversary of the publication of the King James Bible by being the first in Scotland ever to read all 1189 chapters in a readathon, being joined by people of other Christian denominations. This took place over seven days in April 2011. The picture shows those involved in the final session. 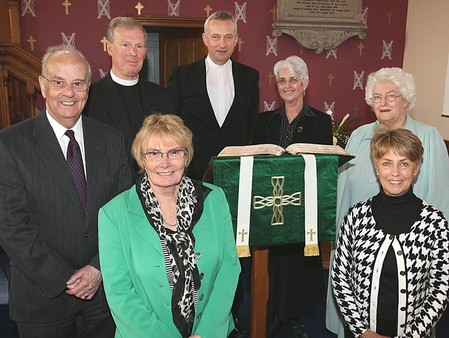